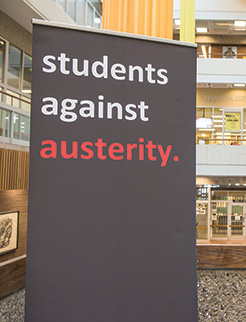 There Will Be Blood

When it comes to post-secondary education in Saskatchewan, these are dire days.

The University of Saskatchewan has started addressing its projected $44 million deficit by 2016, first by shutting down its Kenderdine Campus at Emma Lake for the next three years. And in January, the university laid off 40 support staff.

Daryl Hoffman, news editor at the U of S student newspaper The Sheaf, says this is only the “first wave” of cuts.

“Everyone is on edge,” Hoffman says. “Especially in departments like the [fine] art department. The ones with lower enrolments, all those departments — and things like University Advancement, which is just this unit that does all the administrative stuff. A lot of the low-end people in that unit are worried because they have really vulnerable jobs.”

At the University of Regina, an institution with record-high enrolments, the current funding crisis has the English department fretting hard over its books. How hard? In November, department head Nicolas Ruddick told student newspaper The Carillon that the beleaguered department’s budget meant that further cuts would force the university to choose between teaching entry-level English courses and offering a major in English. Why? Because there wouldn’t be enough faculty left to do both.

Both universities are now setting aside the hacksaw in favour of the scalpel; programming reviews have recently commenced at each institution, with an eye towards the reorganization of departments and faculties as well as the reallocation of funds.

But students on both campuses recognize that the wounds left from the excision of staff, programs and services will leave scars on their education.

And some have decided those are scars they have no interest in bearing.

Devon Peters is a member of the Regina chapter of Students Against Austerity (SAA), a group that has sprung up on both provincial campuses. Since its formation a few months back, the group has grown in size and scope, presenting around a hundred classroom talks and picking up faculty support.

Peters says the reaction to funding shortfalls — scaling back support staff, reducing sessional and teaching assistant hires, cutting funds from faculties to effectively block them from hiring new staff, raising tuition — is misguided and out of touch with student experience.

The big issue, he says, is administrative funding mismanagement.

“I feel like the reason those cuts are coming in is because we see figures like faculty salaries increasing 60 per cent over 10 years and administration salaries increasing 176 per cent over 10 years,” he says. “In the traditional conservative rhetoric of it all, you know, ‘we don’t like bloated social programming’ — well, what does the university start to sound like when you go from $7 million to $19 million spent on administrative salaries in 10 years?”

Adding to the frustration is what students perceive as a lack of transparency on the administration’s end. University of Saskatchewan student Melissa Gan, speaking on behalf of the Saskatoon branch of SAA, says that the changes being made to the school are far from consensual.

“When I attended the University Council Meeting last week, I got the sense that the university administration has already decided what needs to be done, and that public consultations and voting by council are simply acts to appear open and democratic,” she wrote.

Hoffman points out that Saskatchewan is far from the first province to scale back its university funding.

“If you do look at Alberta, they’re negative — their grants are going down, not even decreasing by inflation. The same thing in Ontario. It’s a huge trend all over Canada.”

But Hoffman admits that it’s “weird” to watch the government of a supposed boom province gradually shift toward post-secondary austerity.

No doubt — especially since the government has decided to both loan the Roughriders $80 million for a new stadium and strip itself of around $40 million in annual revenue via the elimination of the provincial film tax credit. Followers of both of those stories might look at the notion of this government critiquing its universities for poor fiscal management and remember an aphorism about stones and glass houses.

Sure, the universities are held accountable to the Province through their boards of governors — but those bodies are largely appointed by, well, the same provincial government that’s now clawing back funding. If the boards have overseen the financial mismanagement of the universities, then it stands to reason that the government’s vetting process leaves something to be desired.

“If we only focus on one end of the issue, it will be like only replacing one tire on your bicycle when both are clearly flat,” she says.

In the meantime, students are worried about the quality of their education — students like Maddy LePage, a fourth-year business major on hand for a late-January forum regarding the U of R Academic Program Review.

“I’m a business student, but there’s also things like economics and fine arts that I’m interested in,” she told Provost Tom Chase. Lacklustre programming in other faculties, she explained, affects the quality of her degree. And she asked the question clearly on every student’s mind.

“I’m just wondering, what will the university do to protect my quality of education and ensure that, when I’m going to apply for a job, I’m not hurt by my degree coming from the University of Regina?”

It’s a quality question — regardless of which university you’re attending in this province.